THE MAN FROM ROME

The sceptical priest Filippo (37) is sent by the Vatican to investigate and debunk a crying statue of the Virgin Mary in a Dutch southern border community, where four years ago a boy shot and killed eleven of his schoolmates. Attracted and unsettled by the mute young woman Térèse who discovered the tears, he gets entangled in the village’s grief and a series of apparently miraculous events that bring down his certainties about his calling as a priest and as human being. 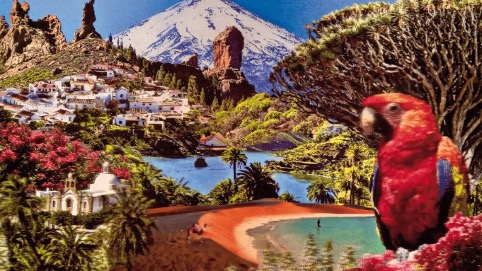 Tenerife, the 90s. Dolphins, parrots, prickly pears and two siblings. Rayco, 8 years old, is fascinated by the arrival of Michael Jackson on the island, and by a hermit who lives in a cave facing the sea. Paula, 13, faces the imminent eviction of her grandmother while also wandering through abandoned hotels on the coast. A family portrait from the point of view of two siblings about to leave childhood behind.

Killing Crabs is a portrait of a certain time and space: the island of Tenerife in the 90s. The childhood of screenwriter and director Omar Razzak. After studying Audiovisual Communication and Film Creation and Management in Madrid and training in Paris and Montreal he founded Tourmalet Films, together with Manuel Arango. Among his productions, Stockholm by Rodrigo Sorogoyen (Goya Award); the documentaries The inflated jungle by Alejandro Naranjo (FICCI, DokFest, Seminci); Double Me by Felipe Rugeles (FICCI – Cartagena Film Festival 2018, Jihlava International Documentary Film Festival 2018) and the minority coproduction La Última Primavera / Last Days of Spring by Isabel Lamberti (IJswater Films, Cannes-ACID, San Sebastian-New Directors Award). As a writer and director, he has released the documentaries Paradiso (Transylvania, Brooklyn or SEMINCI) and La tempestad calmada (ICA-London, Dok.fest München, DocumentaMadrid).